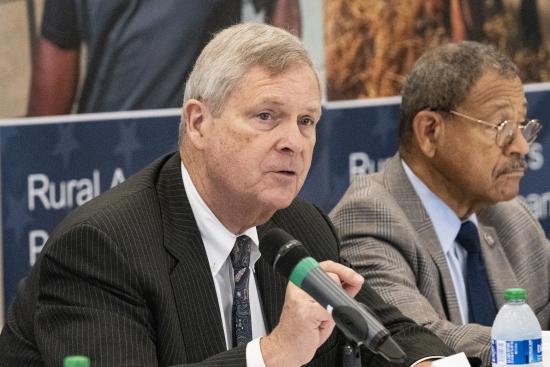 The pandemic exposed the weaknesses of a food system built around large-volume production and national supply chains, said Agriculture Secretary Tom Vilsack on Wednesday. As a remedy, he said, the USDA would help independent processors start up or expand their operations and encourage local marketing.

During a speech at Georgetown University, Vilsack said the USDA would put nearly $3 billion into grants, loan guarantees, and an array of programs to transform the U.S. food system. Farmers would earn more money and consumers would have more food choices with additional regional processing capacity, he said, and greenhouse gas emissions would be reduced with fewer miles between farm and dinner table.

“Building the system back better, stronger, and more resilient requires an unprecedented approach, and that is what we are investing in at significant levels today,” said Vilsack. “And while billions of dollars are being invested in this food system transformation, it’s going to require consistent and substantial funding in the future to ensure that the investments of today are built to last into the future. As Congress begins work on the next farm bill, it’s going to need to focus attention on continuing this effort.”

While $3 billion is a noteworthy sum, Americans spent $1.7 trillion on food in 2020, down by $100 billion from 2019 because the pandemic kept people out of restaurants.

More than half of the funding announced by Vilsack would go toward expanding small and medium-sized independent processing capacity, with $875 million for meat and poultry processors and $800 million for supply chain infrastructure for fruits, vegetables, and nuts, and for certifying safe practices on the farm. The USDA also would put $400 million into regional food business centers and $300 million into helping farmers transition to organic production.

House Agriculture chairman David Scott said he supported Vilsack’s proposal. “I applaud Secretary Tom Vilsack and USDA for their hard work to implement these resources in a way that will make the supply chain more resilient, give producers access to markets and fairer prices, and ensure that all Americans have better access to nutritious and affordable food.”

Some of the largest U.S. meatpacking plants slowed or temporarily halted production in April and May 2020 due to coronavirus outbreaks among their workers, driving up retail meat prices and creating spot shortages. Supplies of milk and butter were also disrupted by stay-at-home orders. Fruit and vegetable growers lost customers with the restaurant industry shut down.

The interruption of meat supplies fanned calls for a network of smaller and more localized processing plants that could maintain production when illness shuts down a major plant or two. Smithfield Foods operates the world’s largest hog slaughterhouse, with a capacity of 32,000 hogs a day, in Tar Heel, North Carolina, for example.

Skeptics say smaller plants are not as cost-efficient as large ones and that it would take a lot of small plants to offset the volume of a large plant. The 15 largest hog plants slaughter 59% of the pigs in the country.

A trade group, the North American Meat Institute, said last week that the industry already is resilient. “USDA’s own data tells us that in both 2020 and 2021, throughout the pandemic, regardless of slowdowns in processing, there was record beef production.”

The Organic Trade Association said the $300 million announced by Vilsack would jump-start growth in the $63 billion sector “by making the organic transition process more accessible and impactful, particularly for beginning and socially disadvantaged farmers and ranchers, who experience unique challenges to accessing resources and support programs.”

A USDA description of its framework to transform the food system is available here.