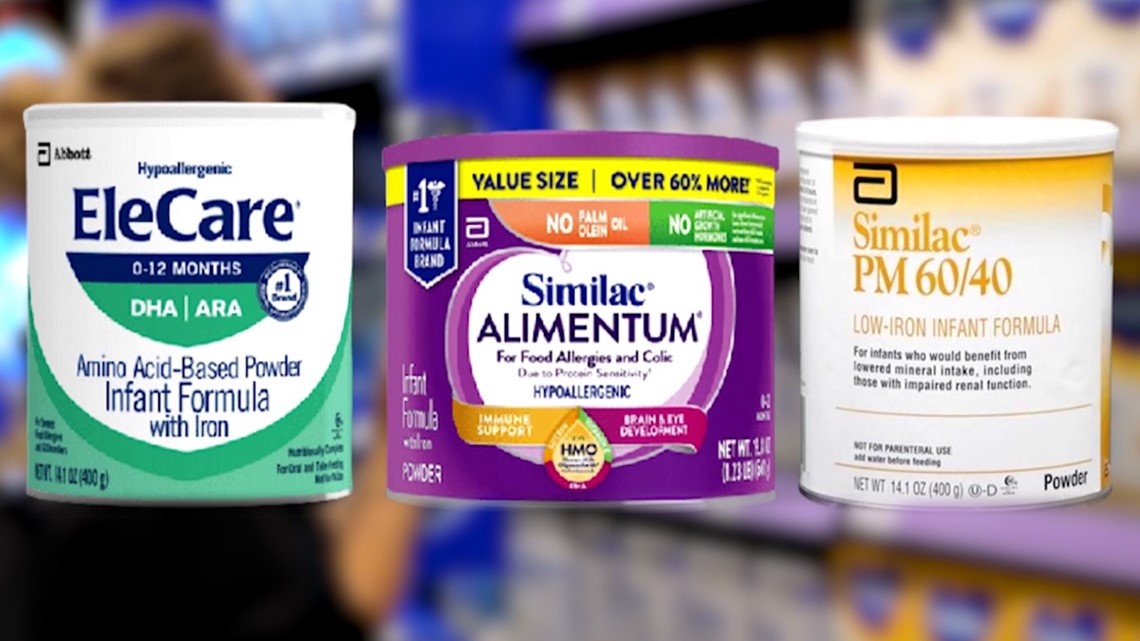 More than a month after a major recall involving baby formula, parents and caregivers say finding food for their babies is becoming even more difficult.

YORK HAVEN, Pa. — Parents are taking an even longer look before they buy baby formula these days — if they can find it.

The Federal Drug Administration says two babies have died after consuming the product.

Parents like Nathan Harig of Cumberland County, who was giving that formula to his daughter, say it was a really scary time.

“This product had been recalled for something that could have been really dangerous to her,” Harig said. “It was very frustrating and worrisome that this was happening the entire time, putting her at risk.”

Now, the FDA says Abbott failed to maintain sanitary conditions and procedures at a manufacturing plant in Michigan.

On top of the fear of hearing your baby’s only supply of food could be dangerous, now parents like Harig were left scrambling to find something new to give to their infants.

“It was sudden,” he said. “It wasn’t like something we could plan or phase-in.”

Jennifer Anthony is caring for a set of twins in York County. They were using the recalled formula too.

“You cannot find it in any of the stores because they are on the WIC program, so you can only get specific sized cans in specific stores,” she said.

The state Department of Health says Pennsylvania WIC expanded the infant formula list to allow additional formulas to be eligible under the program, but it’s not making it any easier to find the products in a world that had supply chain issues before the recall.

Anthony said, “So you just worry about not only your own babies, but all the babies out there who may not have their next feeding because because parents can’t afford it or they can’t find it on the shelves somewhere.”

FOX43 Finds Out reached out to several healthcare systems in south central PA to see how they’re dealing with the recall, and which formulas they give to new babies.

Wellspan provided us with a chart that offers name brands and alternatives.

Penn State Health says it uses variety of formula brands, but if and when any products are recalled, they are immediately pulled from use.

No other hospitals got back to us.

For now, at least Harig and Anthony say they have no plans to switch back to the Abbott formula they were originally using.

United States senators say Abbott has yet to hand over all documents related to the issue.

People also want to know why the FDA didn’t act sooner on the recall, since the agency visited the Abbott plant in late September, which was right around the time of the issue, and cited several problems.

It appears no formal complaint filed at the time.

FOX43 Finds Out reached out to Abbott for their reaction to what has been happening since the recall. A spokesperson sent us this response:

“We’re taking this very seriously and are working closely with the FDA to implement corrective actions. Abbott is committed to upholding the highest standards for manufacturing of all nutrition products. We have already begun implementing corrective actions and enhancements at the facility, leveraging new technology and strengthening our processes, to give parents and customers renewed confidence in the quality of manufacturing at our Sturgis plant when we restart operations there.

Other options for baby formulas

The Pennsylvania Department of Health has a list of the types of formula eligible for WIC participants to receive in place of recalled items, what to do with the recalled formula and what alternative formula could be purchased using an eWIC card. Information focusing on the infant formula recall is available on this PAWIC webpage: English Infant Formula Recall Information.pdf (pawic.com)

The DOH also says families concerned about the recall can also contact Abbott directly with questions or concerns at 1-800-986-8540 or by visiting similacrecall.com.

If you have a story you want Jackie De Tore to look into, FOX43 wants to find out. Send her a message on Facebook or send an email to [email protected]