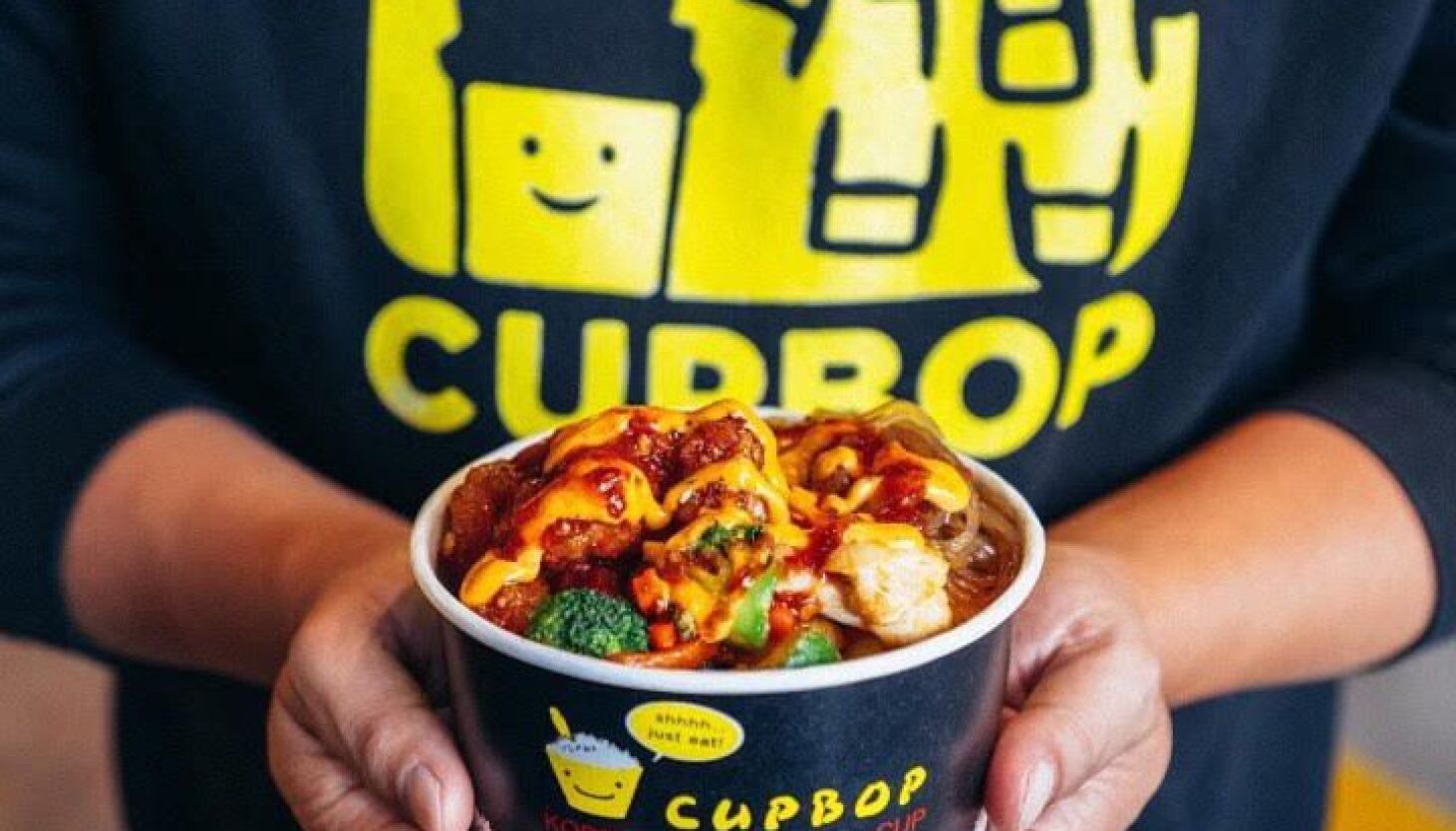 Food in Business
Maggie Ackerson
May 2, 2022

Dok Qwon left an investment banking career in New York City to work for a Utah-based food truck that he used to frequent — and he couldn’t be happier about it.

“I would’ve never expected that I’d get involved with food, but this is probably the only food that I ever would’ve gotten involved with,” Qwon said.

That food truck was Cupbop, a Korean BBQ joint specializing in Korean BBQ served in a cup.

Qwon, who moved to the U.S. from Korea at age 11, said that he has a “pretty good understanding” of both Korean and American cultures and when he first tried Cupbop, he thought, “This is a product you can take national.”

After being in the hustle and bustle of the New York financial scene for seven years, Qwon was “itching” to try something new. In the midst of a search for his next move, he remembered Cupbop.

“I was like, ‘Oh, Cupbop, I should take that national. I can probably definitely help do that,” Qwon said.

With that, he reached out to Cupbop’s owner, Jung Song, who he had grown to know after being a loyal customer for some time.

When Qwon connected with Song, Cupbop was still more of a local business, with 10 stores at the time.

“It was getting to a point where you’ve got to take some crucial steps to take it to the next step and really become a business,” Qwon said. “Taking that route, to be able to set the foundation, to be able to scale the company.”

With his experience as an investment banker, Qwon said he understood the struggles that companies of Cupbop’s size generally have and thought that he could help.

On the other hand, he had a lot to consider — including whether he really wanted to leave a lucrative career to embark on this new journey.

“You do get paid a lot being an investor in New York, and all of that, but I was like, ‘You know what? There are a ton of people who are super rich at hedge funds in New York, but nobody has been able to take a Korean food concept and turn it into a national quick-service restaurant brand … I could be part of that journey,'” Qwon said.

After a series of discussions, Qwon officially joined Song and Cupbop, where he now serves as the chief operating officer.

Cupbop now has more than 36 brick-and-mortar locations in the United States, between Utah, Idaho, Arizona, Colorado, Nevada and Oklahoma, along with over 100 Cupbop stores in Indonesia.

Song credits the growth of his business to a passionate and loyal customer base.

“We have some of the most loyal customers out there,” Song said in a statement.

With a clear goal of growth and expansion, Qwon said that Cupbop is trying to stick close to the roots that allowed them to build such a strong customer base.

“We stress our culture so much,” Qwon said. “Culture is above everything when we’re in the room with all of our leaders and managers and everybody at Cupbop.”

The culture that Qwon speaks of is the enthusiastic nature of Song and his dedication to excellent customer service that initially drew Qwon to Cupbop and “what the truck got known as.”

“This crazy truck with a bunch of Asians who are just yelling and dancing,” Qwon said with a laugh. “That was very refreshing.”

He said that in the early days of Cupbop, Song would become frustrated when he saw long lines for other food trucks and no one lining up for his Korean BBQ in a cup.

So, Song started yelling, dancing — he used to be a breakdancer in a previous life — and enthusiastically interacting with customers to draw some attention to his food truck.

“That’s how the truck really started getting attention,” Qwon said.

Qwon said that this enthusiasm and focus on customer service wasn’t just a way for Song to attract more business, but also to combat stereotypes of Asian food.

“The stereotypical Asian restaurant, you know, generally we think of is kind of hole-in-the-wall — (the) food’s good but it’s kind of dirty, service sucks — that’s just the stereotype that we can’t escape,” Qwon said. “He wanted to totally break that.”

“When it involves everybody buying in to get that done at a store level, at every single store, it gets very difficult, but that’s something that we will never give up,” Qwon said. “That is the heart and soul of Cupbop.”

‘Shark Tank’ and the future of Cupbop

Even after finding success in some international markets, Qwon said that Cupbop is now focused on continuing its U.S. expansion efforts.

“If you go national in the U.S., you’re already global — that’s how it works,” Qwon said.

He and Song are always having conversations about how to get more exposure, he said. One day, Song approached him with the idea of trying to get on the popular fundraising show, Shark Tank, where budding entrepreneurs try to convince a panel of six industry giants, also known as “Sharks” — including Barbara Corcoran, Mark Cuban, Lori Greiner, Robert Herjavec, Daymond John and Kevin O’Leary — to invest in their business idea.

They applied and a couple of months later got a call from the Shark Tank team inviting Cupbop to appear on the show.

“It was a very, very long process. But we ended up appearing, and so we filmed last September,” Qwon said.

By appearing on Shark Tank, Qwon said that they’re looking for the increased exposure that comes from appearing on a popular national television show, but also to soak in any advice they can from the panel of highly successful business-minded people.

“Shark Tank and the Sharks bring something to the table that none of the traditional (investors) bring. You instantly create a brand, and that’s just so powerful,” Qwon said.

“It was such a crazy experience,” Song said. “I have never been on a reality TV show, and seeing everything happen behind the scenes is so cool.”

Despite their regional and global expansion, Qwon said that Cupbop is forever grateful for its Utah customer base that helped them grow.

“We’re so fortunate that we started here, and we’re so thankful to all of our customers everywhere, but especially in Utah, where we started, and is absolutely our home ground,” Qwon said.

Folks interested in watching Cupbop’s Shark Tank appearance can do so by tuning in to ABC on Monday, May 2, at 8 p.m. MDT.

“My dream with Cupbop has always been to take it to the moon,” Song said. “We want everyone in the universe to try Cupbop and experience our culture through our food.”