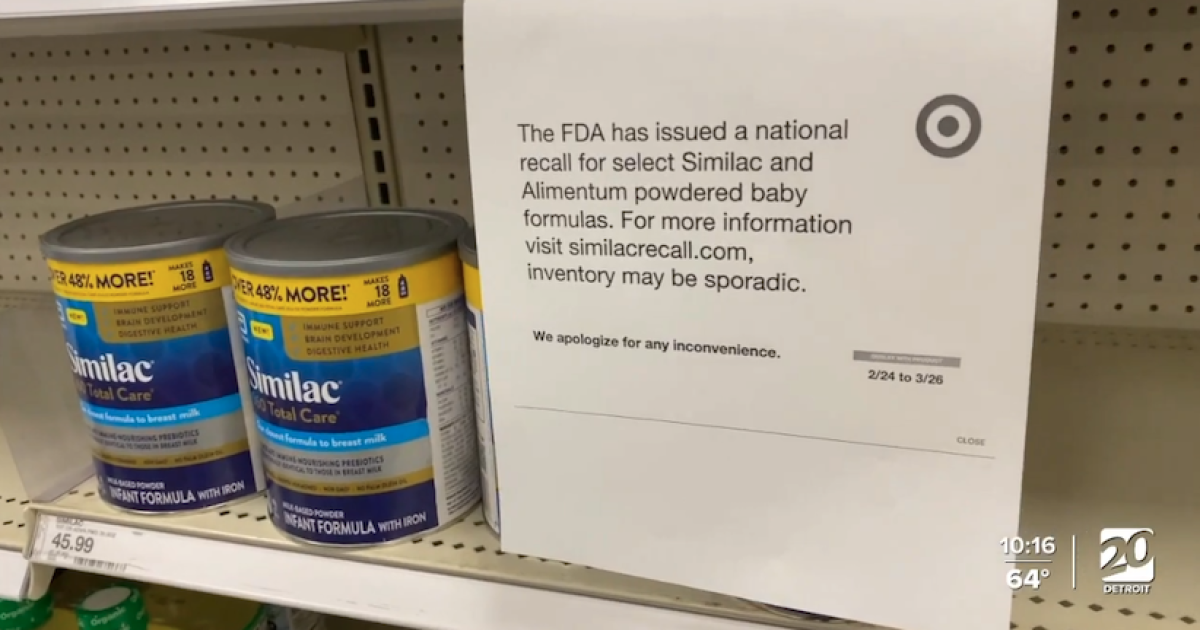 Empty shelves and signs rationing out supplies is a sight many have not seen since the early days of the pandemic. But moms across metro Detroit say it’s a constant crisis.

“What happens if she drinks her last bottle?” Ashley Rippey asked.

Rippey says she spends hours online searching for a store that has her daughter’s sensitive stomach formula stocked and if she is lucky, one out of seven stores will have one can.

Williams after many failed formula attempts finally found one that settled his stomach, but after the doctor’s samples ran out, she quickly realized it was close to impossible to find the brand in stores.

“We had to get a family member from Chicago to find it for us and bring it down here, which it just got here this week,” Williams said.

Prior to her cousin saving the day, Williams says they were forced to give her 6-week-old son food they knew he was allergic to, causing him to break out, cry and become constipated. And she fears in a few days, they could have to do the same thing.

“We only got to get four cans from down there, and the milk doesn’t last that long. One can only lasts two-and-a-half days,” Williams said.

“We had a bad situation with access to baby formula before, and the recall by Abbott only made in worse,” said Kevin Ketels, an associate professor at The Mike Ilitch School of Business at Wayne State University.

Ketels says a massive formula recall earlier in the year is one of the causes for the empty shelves, with 31% of formula products being out of stock across the country.

According to Ketels, Abbott has begun airlifting formula products to the states to fill the gap, and other companies are looking at ways to stretch the supply. But he says the solution could take weeks if not months.

“Hopefully, the company can ramp up production quickly and we can avoid the severe shortages that we have right now, but we will not be able to escape the general shortages just because of the pandemic” Ketels said.

In the meantime, families have had to become resourceful. Posting on social media to see if anyone has extra samples or reaching out to families members in other states to be on the search.

In response to this story, an Abbott spokesperson reached out to 7 Action News with this statement:

We know that the recall of Abbott’s Similac infant formula has further exacerbated an industry-wide infant formula supply shortage, and we deeply regret the anxiety and impact this is having for parents, caregivers and healthcare providers. We are doing everything we can to address it. Across the U.S., we’re prioritizing production of infant formula products to help replenish the supply in the market, and also air shipping in product from our FDA-registered facility in Cootehill, Ireland, on a daily basis. All of this product is being restocked on a regular basis and in some cases, daily. We’re already starting to see this product on retail shelves. Actions we’re taking to address supply include: