While most Muslims prepare to break their fast at sunset during Ramadan, not all will be able to relish the sweet release of their first meal of the day.

For those in hospitality like Elzhe Pahir, chef and manager at Tarim Uyghur Handmade Noodles in Auburn, the day ratchets up as sunset approaches.

“It’s hard but cooking for a restaurant is a pretty good thing to do during Ramadan,” he says, as he helps his kitchen prepare for the inevitable dinner rush.

Ramadan is the holiest month of the year for Muslims, where they must fast between sunrise and sunset.

In Sydney, iftaar (the evening meal with which Muslims end their fast) is at around 5.30pm this year. But prep work begins long before that.

“We start preparing from 3pm; our food is not that easy to prepare as well,” Pahir says. “Everything needs to be done fresh.

“It’s hard to cook while we fast. The hardest part is that I can’t taste anything. So sometimes, we might have too little salt and we can’t tell.”

Tarim is a popular Uyghur spot in Auburn, known for its dumplings, handmade noodles and warm atmosphere.

It’s an unpretentious shop, wedged between small grocers and opposite rumbling train tracks, but has fostered a strong connection with the local Muslim community.

“During the day it’s pretty quiet, 85% of my customers are Muslim. At iftaar time, the front and back area are completely full, there is even a wait sometimes.”

“It gets so busy, we need to break our fast in the kitchen here. We have to.”

But while the iftaar rush shapes the day at Tarim, it isn’t the most important time for Turkish patisserie Gaziantep Sweets, down the road.

Their rush comes hours after iftaar, once everyone has finished their meals, prayed their prayers, and is itching for something sweet.

“Ramadan is like a rejuvenation for us,” owner and head chef, Zeki Atilgan, says as he pipes chocolate over baklava. “We wait all year for it.

“It’s not particularly hard cooking while fasting, but it is tempting.”

The smell of puffing filo and warm rosewater syrup snakes its way into the sidestreets around Gaziantep, which is located a short walk from Gallipoli Mosque, one of the biggest and most popular mosques in Sydney.

Once the nightly prayers are complete, mosque-goers stream into the shop, looking for something to take home, or a quick bite. “We actually get a lot of traffic during the day,” Atilgan says. But at night “everything doubles, you can feel it”.

“It helps the business dramatically.”

A similar late-night rush occurs at Sneakies Kitchen in Homebush, where owner, Baris Kopuz, has extended opening hours to cater for midnight cravings.

“We get a lot of the second round of iftaar,” Kopuz says. “A lot of people stick to their family traditions when they break their fast, but we always have a second feed.

“Because we’re open late, we get the second round, people going for a snack or maybe something more.”

Known for their “pizza-burger”, Sneakies is an international grab-bag of fast food, serving everything from burgers to pastas, loaded fries and wings. Kopuz describes his menu as “east meets west”.

“Obviously both cultures are very strong to me. You know, like I’m a part of both. I was born and grew up in Australia, but my background is Turkish, so it’s a bit of a fusion. It represents me to a tee.”

Drenched in neon red, Sneakies is a mostly outdoor setting, with a projector in the centre of the space showing whatever football match happens to be on. Inside, bright colours dance around the kitchen, reflections from theneon signs, toys and arcade machines that line the walls..

Alcohol is prohibited in Islam, and Kopuz believes the casual but alcohol-free environment that Sneakies offers is a major reason for its popularity.

“It helps, people knowing this is a halal environment … people can feel comfortable late at night.”

But not all halal restaurants feel the benefit of Ramadan. Kabab Al Hojat in Merrylands, serving traditional Afghan barbecue with bread and rice, doesn’t see a surge.

“The majority of our customers are Muslim, so our business is heavily affected during the day,” says owner, Rajab Ali.

“Its probably the worst month for us in terms of business,” he laughs.

He plans ahead for the lull, reducing the restaurant’s orders from suppliers for the month.

Kabab Al Hojat has become a staple lunch spot in Merrylands. Ali says that although it does get busy at night, that “doesn’t make up for what we’ve lost during the day.”

Although orders are slow, the charcoal remains warm all day, roaring to life as night approaches, hugging the suburb with the scent of fire-baked bread. 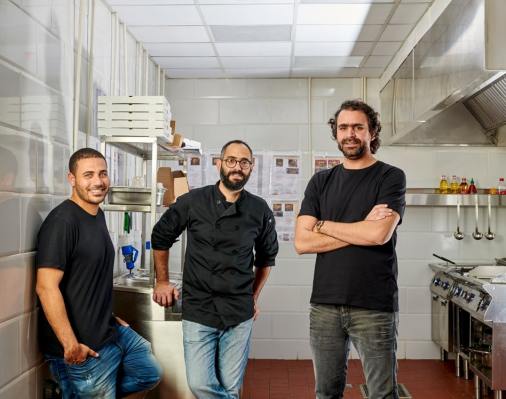